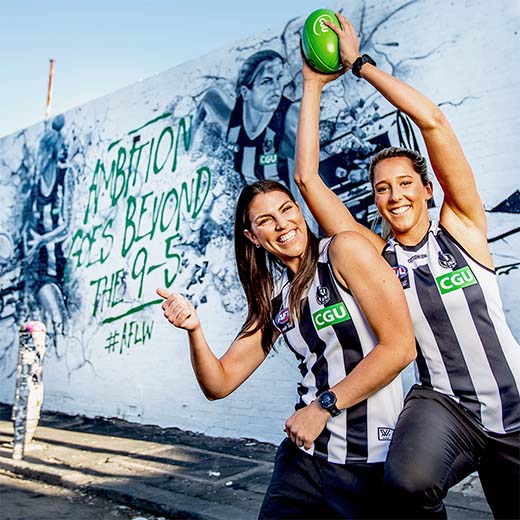 Using their sponsorship of Collingwood FC AFLW team, CGU asked us to look at how they could start a national conversation around “ambition” positioning CGU as a progressive, modern and contemporary brand. They wanted a culturally relevant activation that helped draw attention to the ambition female AFL players need to play in the league, given many of them also have full time jobs.

Women playing in the AFL are extremely passionate & determined but with salaries for women falling significantly short when compared to the men, many of the players have to juggle training with full time work. We needed to celebrate the ambition of Collingwood women in a way that focused on their achievements rather than on the pay gap, delivered in a way that would drive earned through social.

We identified street art as the right channel for this brief for two reasons; Firstly Melbourne, in particular Collingwood, is synonymous with street art and therefore a culturally relevant medium to start a conversation; secondly, it allowed us to create something on a grand scale within the neighbourhood, that would draw attention & encourage natural social sharing.

We created 2 large murals featuring 4 of the Collingwood womens AFL team. The visual showcased the women in the Collingwood kit, with the background a representation of their day jobs. The inclusion of a # helped drive social & the striking headline "Ambition goes beyond the 9-5" delivered the sentiment behind the project.

To further amplify the campaign, two of the players were featured in social content, sharing their back story & pride at the piece and additional coverage across one of the main TV networks helped support the project.