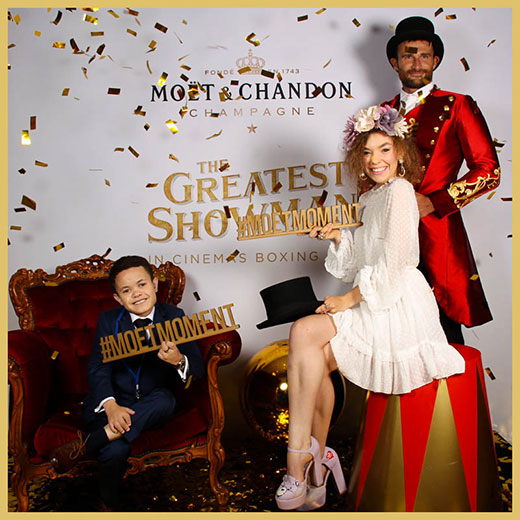 Moët & Chandon came to us to help them negotiate and execute their partnership with 20th Century Fox’s bold and original musical, The Greatest Showman. They wanted to leverage the red-carpet premiere to amplify their global strategy #moetmoment, an initiative which sees the champagne brand encourage consumers to share the moments in their lives worthy of celebration with a bottle of bubbly.

The Greatest Showman was Hugh Jackman’s passion project and his appearance at the premiere alongside co-stars Zac Efron & Zendaya was a huge drawcard for fans here in Australia. With The Greatest Showman tipped to be 20th Century Fox’s biggest release of the year, the anticipation from fans was high and we capitalised on that leveraging the movie IP in our comms and offering a money-can’t-buy prize to attend the premiere. We extended the excitement around the movie by creating content from the night that was seeded through their social channels, celebrating the movie launch with fans.

The star-studded event was hosted at the The Star in Sydney and in attendance were the cast and crew of the film including Hugh Jackman, Zac Efron & Zendaya, alongside a whole host of well-known Australian celebrities & influencers. Moët was integrated in to the premiere in a number of ways with mini Moëts served to guests on arrival, POSM placement along the walk to the theatre and in the main bar area, and finally the main focal point, a themed photo activation to drive social sharing.

Guests attended on the night